These next pics are from the Ward House.
This house was built in 1881 in Peck, Michigan right after the great Thumb Fire
which devastated Sanilac County, parts of Huron, St. Clair and Lapeer Counties in Michigan.
Its been told that the fire was so loud that you could hear it a mile away.
Sailors on Lake Huron could feel the heat 2 miles out on the lake.
The fire was said to have been faster than a horse at a full gallop.
My great grandparents John and Rosemary Husson
were spared from this unbeleiveable force of nature,
along with their farmhouse, land and outbuildings.
Unfortunately thousands of folks were not so lucky,
and almost 300 lost their lives to this wild fire.
A similar fire of the same proportion hit the west side of the state too.
It was a time where lumber was cut at an alarming rate
and no one realized at the time that a time bomb was waiting to go off,
because even though the logs were being put to good use,
the leaves and unused portions of the trees were left.
One lightning strike would start a massive, deadly fire.
And it did.
The Ward family was lucky to have survived, but lost their home and animals.
This is their home that they rebuilt. 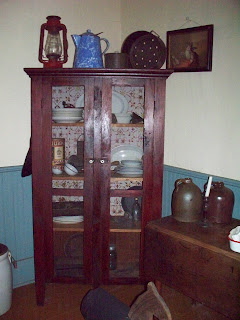 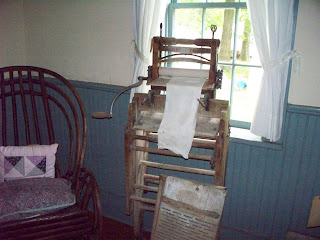 A women's work was never done. 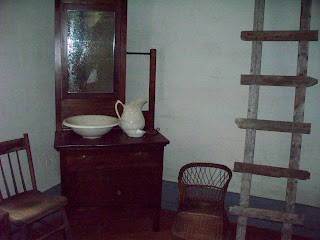 Part of the bedroom.
The ladder went to the attic. 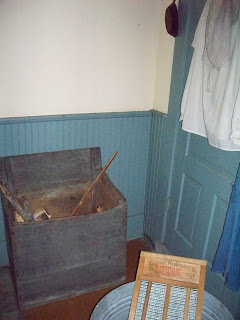 Don't you just love this blue wains coating and door.
The color was original to the home.
Two more pics before I go.
Something I decided to start collecting
A guest speaker inspired me at our antique club meeting. 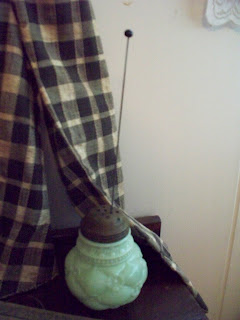 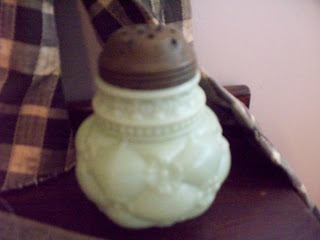 And so starts my hat pin collection.
Take care everyone,
Janice
Posted by Prims By The Water at 10:00 PM