I, Janice have a propensity of purchasing
too many shoes.

Yes friends you heard it first here.
I have enough shoes according to Bob.
I am by no means Imelda Marcos in which I have
a closet full of shoes.
My problem is purchasing antique ones.

I so love them, and well when I saw this
adorable pair in our store from a vendor of ours....
they had to come home with me. 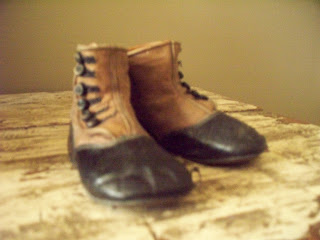 Since I so love antique shoes,
I thought I would talk to you tonight about
concealing shoes.

Have any of you heard about this before?

Concealing (hiding) shoes came about as early as
the 14th century. 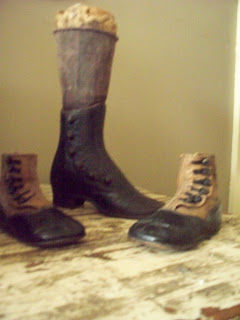 By concealing shoes in chimneys, walls,
under floorboards, in the roof,
around doors and windows and even in ceilings
would protect the living from
ghosts, demons and witches. 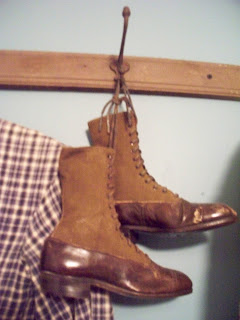 Witches were believed to be attracted by the human scent
of a shoe, and after entering one found themselves
trapped as they were unable to reverse their spell
upon entering a place with a hidden shoe. 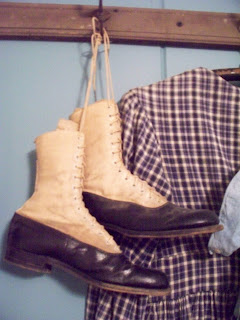 Also the belief that shoes had the power to protect
against evil was said to have succeeded in trapping
the devil in a boot, a legend that may have its origin
in a more ancient folk belief, in which the Church
was attempting to convert one into an
"Approved Christian Rite". 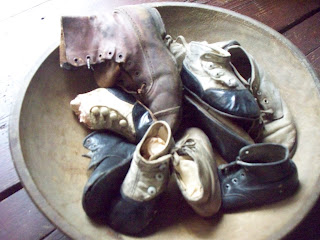 Concealing shoes was also thought to capture
or repel a troublesome spirit, or harmful demon. 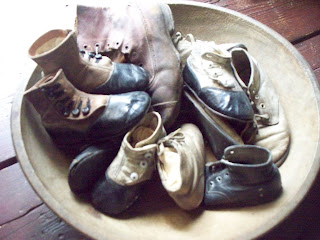 Others perceived concealing shoes as an intention
to bestow fertility to female members of the household.
There is a long standing connection
that concealing a shoe served as a fertility charm.
which exemplifies the nursery rhyme
"There was an old woman who lived in a shoe" 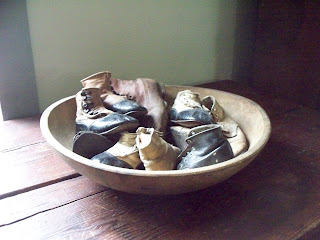 Which reason is more accurate one may never know.
Concealed shoes have been found in homes and buildings
throughout Europe, Australia, Eastern Canada
and The New England states.
Of the shoes found when renovating these early homes
and buildings, 98% were baby shoes.
The most commonplace where the shoes were found,
were in chimneys and hearths.
For whatever reason this practice also died out in
the 20th century. 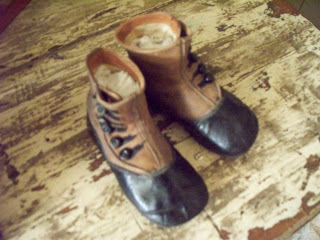 Maybe next time I find another pair of antique
shoes or boots, I should tell Bob it's to rid our home
of ghosts, witches and demons. :-)
Do you think he will believe that malarkey?

Aren't they cute though?

{Still on the hunt for some black and red ones}

Shoe Proclamation Blessings To All!
Janice