Now that I have your attention...I'm not really going to talk about the McCoys. What I am going to talk about is those famous guys from Iowa. If you watch the History Channel on Monday nights, then you will know that I am talking about Mike and Frank from the American Pickers show.

About three weeks ago now, we were told that Mike and Frank would be picking in Michigan in our neck of the woods as their producer had emailed our local Chamber of Commerce asking them to contact the antique stores in town if we knew of any picking spots.

One of our vendors (pictured below) had actually emailed the producer telling him about his carving by an early chainsaw artist Gypsy Jack who had appeared on the Johnny Carson show. Plus he told the producer that Bob and I had some very unusual old carnival items...and that was one of the items on Mike and Frank's list.

Unfortunately, the president of our Chamber of Commerce was in Florida at the time of the original email, and when she finally returned home to let us know that they were coming, the producer of the show had already lined up a couple of picks in the area, so we were out of luck....

We had found out on a April 9th, that Mike and Frank had actually been at a pick about three miles from our house...they were that close...and we did not even get a glance of them...can you believe it!

All day Saturday, I kept looking out our store window, because our store is on the main road, just hoping to get a glimpse of that famous white Antique Archeology Mercedes Van...with no luck. I was bummed. I watch these guys faithfully.

Did I say that I did not even get to see their van...I was disappointed. I wished that our Chamber president had not even told us to begin with...cause she just got our hopes up...

Oh well, one consolation was that our local paper did an article on our vendor who tried to get Mike and Frank into his barn and into our store...so at least we got some free advertising out of the whole thing.

So thank you Mike and Frank...for the free advertising...and I will be watching that episode of your pick on Marsh Rd.,even though I know you don't mention the actual roads you travel on...and if you show a stained glass window...I can say, I know where you got that from too! 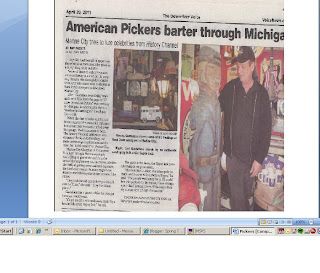 Have a great day everyone!
Janice