I hope all the Father's out there had a grand day!

In Honor of Father's Day,
This CupboadScape is all about
the male folks of my family.

Although my father has been gone
for 25 years now,
I still thought about him yesterday.

My grandfathers and father,
instilled their values, love and compassion.
Plus some fine memories...
even a ghastly one.
See below for the shocking one. 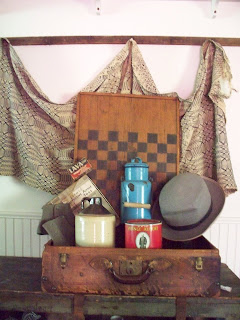 Grandpa Bruno B. was caught making whiskey
during the Prohibition Era and spent a week
in the small towns pokey.
{ whiskey jug } 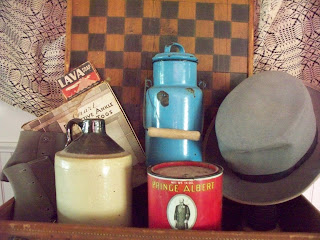 Great Grandpa Robert W.
wore the gray spats.
Spats were placed over the ankle
to protect ones shoes and socks from mud & rain.
{ gray spats to the left with box } 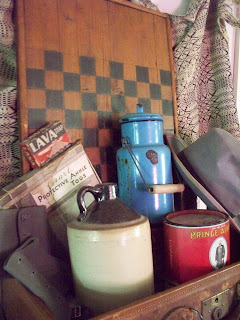 Grandpa Charlie H. use to carry a water pitcher
around the farm for his thirst.
{ blue enamel water pitcher }
We would walk the back pasture
to call the cows in for milking.
He always let me ride one cow back to the barn.

He always scrubbed his arms and hands
after the farm chores were done with Lava soap.
As a kid watching him, I thought he would scrub
his skin right off he did it so hard. LOL
{ Lava Soap } 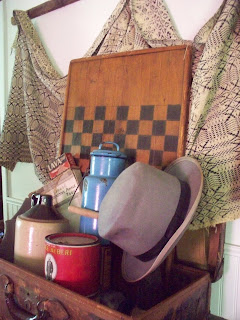 Grandpa H and my dad both liked playing checkers.
I would play with grandpa most nights
when visiting the farnhouse.
{ Checkerboard } 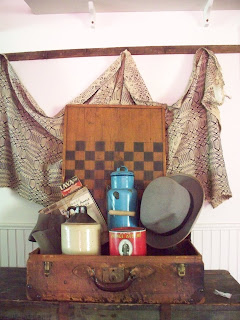 My own father used tobacco.
Up until he was thirty when he quit.
{ Prince Albert Tobacco Tin }

Both Saturday and Sunday Bob's dad
came over for dinner.
It was a treat for us because not only
did he cook us up some ribs,
but he cooked steaks we had bought too.
Yesterday it was so hot that I decided to
make BBQ pulled pork sandwiches
made in the slow cooker.
Potato Salad and a Cucumber Tomato Salad.
Also made a chocolate pie.

How was your weekend spent?