Hi everyone,
This is going to be a quick post. Today is my granddaughter Mikayla's birthday. She is now four years old and going on eight...LOL She is smart little cookie and I love her to death...just literally. Here is my little cutie...

Sweater that I spoiled her with earlier this year when she spent the weekend.

Her mommy decided to paint her nails for the very first time....and she had to show them off! 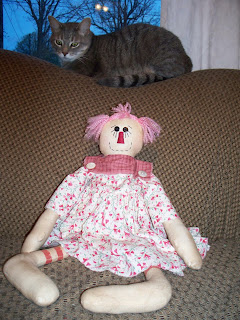 And her favorite dollie that I made for her several years ago. Her favorite color is pink!
The kittie above is one of our boys nicknamed Peeps because of the rings around his eyes.
Actually his name is Squeakers because I believe his vocal chords did not develop as he was the runt of the litter, and he does not meow right...he squeaks. I had adopted his mom not knowing she was pregnant at the time...and had four kittens...another story for later,  but I ended up keeping Peeps and another brother of his which I named Riley.
Anyway this post was to wish my little Mikayla a happy fourth birthday.
Gramma loves you!!!
Posted by Prims By The Water at 8:59 PM