Happy Tuesday everyone.
Hope you all are enjoying your week thus far.

Bob and I went antique shopping again this weekend.
Found nothing.
We both agreed we are getting pickier when it comes
to purchasing something nowadays.
It has to be...what do I say....something special now.

At least we enjoyed a pizza and some beer in a small town
we were visiting. Plus some fresh fried taco chips & salsa.

The remainder of my weekend was spent making some
adorable lil banty (chicks). 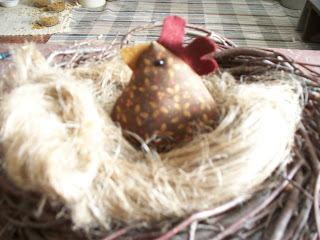 Which brings me to a story about Bantys....
well one in particular.

Gramma B had both Rhode Island Reds
and Bantam (Bantys) chickens.
The banty's were my inspiration for these darling chicks. 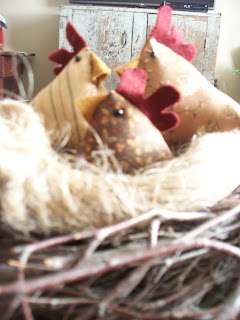 First of all let me say that chickens are usually nice.
They will let you grab their eggs even while still on them.
At least the ones gramma had.
While visiting gramma's farm, one of my jobs was to
feed the chickens, gather the eggs, and clean the coop.
After eating my own breakfast, I would go outside
and open the coop.
The chickens always were in a hurry to get outside.
All but one Banty rooster I called
T H E   D E V I L

He was small, but the devil was in him for sure.
If I got too close to him he would peck at my ankles
and chase me.
Each day I asked gramma to put him on the chopping block,
but she would never accommodate me.
I never knew my boundary with the Devil,
as it was different each day.
At least with the other rooster,
I knew how far to stay clear from him.
Not the Devil.
Once I opened the chicken coop,
I would run behind the shrubs nearby
to see where the Devil went.
He was a sly one though.
Most times he hung around close to the coop.
knowing full well I had to get in there to gather eggs,
and then again to feed them and clean the coop. 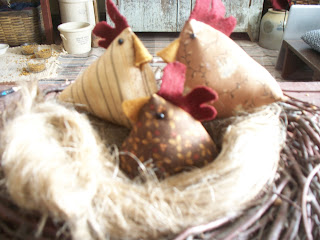 Even when I managed to get inside the coop
and close the door behind me, the Devil
would be outside waiting for me.
Once I gathered the eggs, or fed them,
or was finished with my cleaning,
I would have to open the door slightly to see where
the Devil was.
If he was out of sight, I quickly opened the door
and ran off to the house, or to the other shed to grab the feed.
But there were times he would hide around the corner,
and chase me.
I have no idea why he disliked me.
I hated that dang ole rooster.
When he died...of natural causes, I did a happy dance! 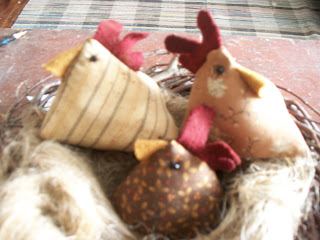 The other banty's were sweet.
Just like the ones I made here.

I made these in three colors.
Each is $7.00 plus shipping if you are interested.

Did you ever have an animal that was so mean
that you called them a DEVIL?

Lil Banty Blessings To All!
Janice