Or should I say Happy Hocus Pocus. LOL

Love that movie and Bob and I watched it the other day. 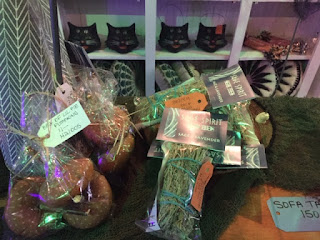 For witch craft, I sold these Lavender sage smudges.
All sold.
Pie pumpkins I made to the left.
In the back on the shelf all of these black cat buckets
are spoken for. 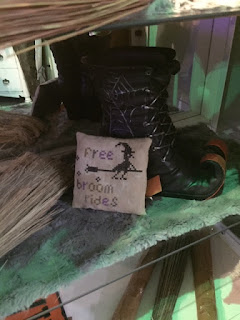 The witch boots are gone. 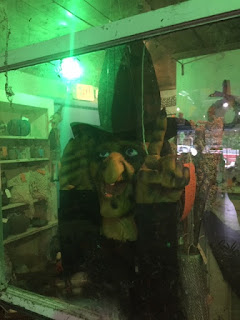 This tapping witch on the window sold first day.
Sold 2 others afterwards. 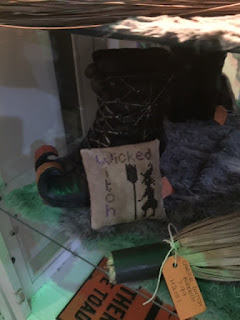 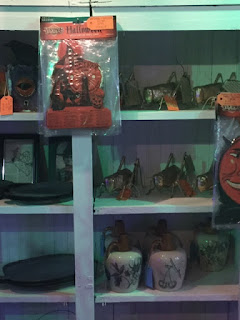 Beistle is back in business,
so I just had to purchase these centerpieces.
So retro looking.
Back in the 1700's it was thought
that witches turned into crickets.
Folks believed crickets were good luck,
and they would leave them alone.
Thus the reason witches turned into them.
This is all just folklore, but fit with my witch theme. 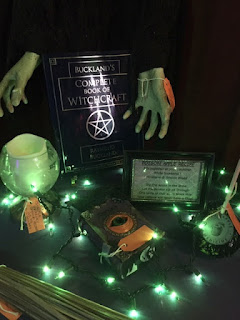 This was an actual witch craft book.
It did not sell, but maybe because I forgot to put
a price tag on it. DUH
I just realized it this weekend. 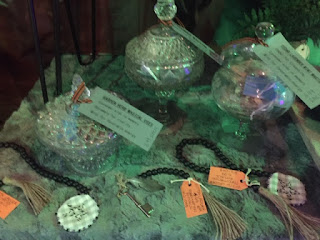 I placed 3 different potpourri in these
vintage candy dishes.
Each with witchcraft properties.
When the dish became empty, I would re-fill.
The black beads with the hexagon star,
I created.
They are called witch ladders.
Used to cast spells.
40 beads are on the on the longer ones.
The shorter one I also made had a feather and key.
Now for a few more ghost stories.
These are recent ones that happened
in our antique store.
It is said that between the months of
September thru October is when ghostly
activity is most prevalent.
Am told because the Earth's crust is at its
thinnest this time of year.
Well we do get more activity at this time.
I don't even like going into our store
by myself during this time.
I always feel like someone is watching me.
First ghost story.
This just happened a week ago.
Our worker is under 5ft tall.
Our radio is higher than she can reach.
Bob always turns it on for her in the morning,
and turns it off at closing.
The radio is on for us and customers.
We always set it to a Canadian rock station,
because their weather reports are most like ours.
Canada is across the river from us.
Any way, our worker goes in the back
and when she comes back up front,
the radio station was turned to a Christian station.
She called Bob right away to see if by
chance he might have changed the station.
Nope, he did not.
But he had to come back and re-change it back.
Ghostly weird.
Then a few days later,
same worker is back behind the counter.
Off flies a shelf and lands in the aisleway near her.
She calls Bob back and says to him,
"Looks like a ghost knocked down a shelf"
Bob comes over again.
If a shelf falls by itself, it would land directly
down on the floor...not fly across.
Unfortunately our cameras are not pointed in either
of these places, so we could not look to see
whom or what did these things.
After 20 years in the business,
we have had many weird happenings.
BOOOOOOO
Hocus Pocus Blessings To All!
Janice
Posted by Prims By The Water at 7:09 AM