Thank you everyone for
the birthday wishes!
It actually snowed Monday evening,
so Bob and I just went out for dinner...
no shopping.
We are going to try again tomorrow evening.

Before I talk about today's story,
I wanted to let you know
why I chose to use a feather tree
with cotton spun fruit ornaments. 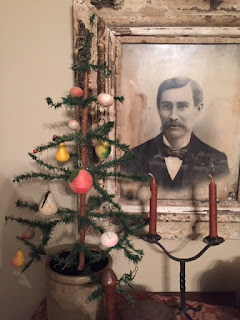 Feather trees were not created until
1880-1890 and it was
the German immigrants who brought
these goose feather trees to America.
It is well documented that Prince Albert
introduced the first Christmas tree to the palace
with all of its German made ornaments and fruit. 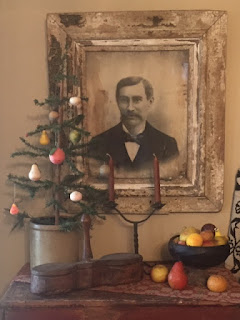 Again Cotton Spun ornaments also
originated in Germany in the 19th century.
A 3 inch ornament would take hours to make.
Cotton made into Santa's, angels, people,
animals and fruit were made. 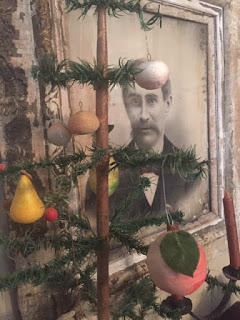 I chose to incorporate only cotton spun fruit
on my tree because fruit in Colonial days were
often given as gifts. 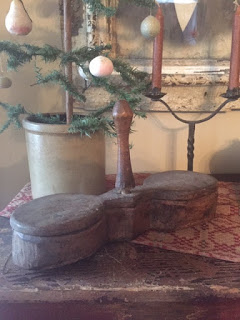 Now my salter is a piece from the 1700's.
Salt needed to be covered to keep from clogging.
Colonial Americans made salt
in iron kettles by boiling brine,
which was essentially salt water from the ocean.
You constantly had to keep the kettle boiling
to evaporate the water...what was left was salt.

Salt was an important part of preserving
meat over the long Winter months.
Even the Settlers reported that
Native Americans made salt in
Kanawha, West Virginia by boiling brine
from the natural springs there.

A steady supply of preserved meats,
played a vital role in the American Patriots
defeating the British during the
Revolutionary War.
The British did not have even meat stored
to supply their soldiers as we did.
So even though the tea tax may have
started the war, salt paved the way for us to
WIN 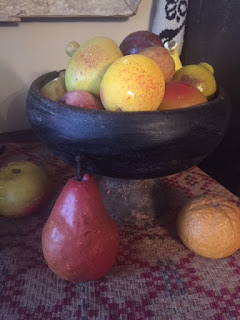 Stone fruit was made in the 19th century,
and would not have been found in a
colonial home. 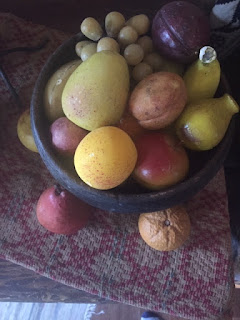 However again fruit was very important
to the Colonists,
so this is why I chose my stone fruit
into my Christmas display. 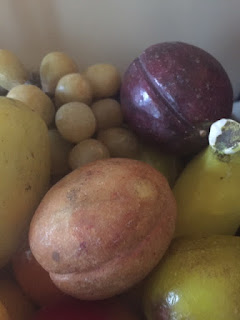 Stone fruit is actually made from marble
and travertine stone.
Stone fruit stuck though when describing
these beauties. 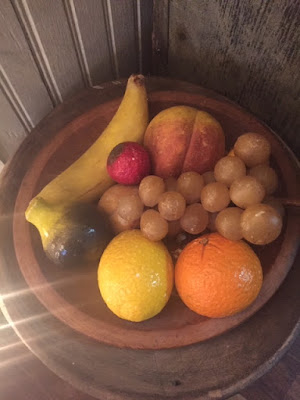 The 2 plums in the other pic
are those which Bob brought home.
He noticed  a whole compote of them
that one of our vendors was selling.