Hello to All!
Autumn sure has approached
us here in the North.
The trees are in full bloom.
The wild Turkeys are foraging for food more.
Squirrels are gathering black walnuts and acorns.
The Deer are getting their dark brown winter coats.
Crows and Bluejays are squawking.
The Blackbirds are coming together
for their migration South,
along with the Canadian Geese.
Like our birds that migrate South for warmth,
we humans up here are nesting inside more.
Furnace is on and all is well. 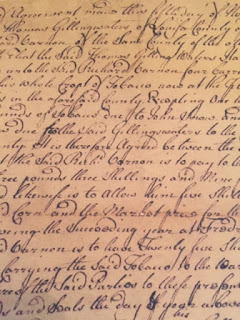 
This Summer the ladies of the historical society
had asked us to be on this year's holiday tour.
I don't want to jinx myself,
because the final houses have not yet been revealed.
The route for the house tour is determined by
the houses that are willing to do this.
Keep your fingers crossed for us. 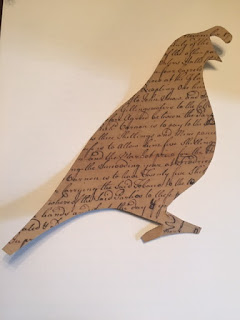 Since we might be on the tour,
I started back in September to decorate
for Christmas starting with our bedroom,
so not as much Autumn decor was put out.

Let me begin by saying that even though
I wanted to do a Colonial Christmas,
this is just my version.
The Colonists did not celebrate
Christmas as we do today;
even though Colonial Williamsburg
would like you to believe they did.
My upcoming  Colonial Christmas version
will not be from the 1700's either.
Just my own interpretation of it.

Today I would like to talk about my colonial
partridge in the pear tree.

Now mind you the first Christmas tree did not
appear until the 1850's.
Again this Christmas theme I have chosen
will be my interpretation
of a colonial one.

However the song the 12 Days of Christmas
was written in 1790.
A verse from that song was
"my true love sent to me, a partridge in a pear tree"

This gave me the idea for my first colonial christmas tree. 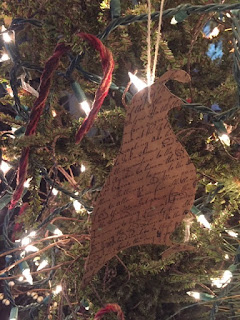 I printed a page of colonial writing on brown
cardstock {first pic} and with a quail pattern
that I drew out,
cut out 6 quails for my tree.

Old World Quails back in the 1700's
were called partridges. They were brought over
from England and are smaller than our present
New World Partridges which are found out West.
These partridges are now called
the Common Quail,
and are found throughout the East.
They nest on the ground and their diet
consists of seeds and small insects.

The Old World Quails are smaller and plumper
than their cousins the New World ones.
Originally there were 6 species of these quails
across the world, however two are now extinct.
The New Zealand and Canary Island quails.

My last picture gave you a sneak peak
of my Partridge in a Pear tree.

Hope you stay tuned as I show you more
in the upcoming months
of my version of a
"Colonial Christmas"
and the research I uncovered.