Good afternoon friends.
Can you believe October is almost over?
I will end our Hannibal vacation
with acouple of tours we took.
First was the riverboat ride we took
on the Mississippi River.

This is the riverboat we were on.
It was an hour long excursion.

Captain Steve was awesome
and we learned that the river depth in Hannibal
is 39 feet, while down near New Orleans it is around
100 feet in depth.
The day of our tour it was up another 5 feet
due to some rains in Iowa a few days earlier.

We arrived at the boat and went on this houseboat
to the right which was turned into a gift shop,
and where you pick up your tickets. 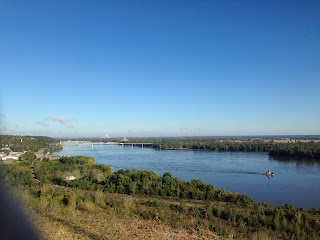 The big Muddy as it is called,
is blue when calm.It turns muddy,
when it is churned up by the barges.

One more tour we took,
was a haunted one at night.
We visited many houses that are known
to be haunted while hearing the stories
by our tour guide Lisa.
Ken her husband drove the mini bus,
and we stopped at each location to hear the stories.
Our favorite part was when we went to the cemetery,
where we were given dousing rods and told
that the energy in the cemetery
would take us where we needed to go.
Lisa could not explain it, but she told us that we would
be drawn to headstones that meant something to us.
She did not steer us wrong.
Bob used the rods as I manned the flashlight.
His first stop was a tombstone that bore the birth date
of his grandfather and the second was that of his
grandfather's girlfriend Hazel
who he dated after his wife passed.
Next the rods took Bob to other side of the cemetery.
The head stone revealed
my grandfather's date of birth of 1899.
Right away Bob's rods moved to the left
where lo and behold the name on that headstone was that
of my grandfather Charles. It was spooky and cool
all at the same time.
We wanted to stay longer, but we had to leave.

If you like these type of tours, I suggest going.
It was fun, exciting and definitely dark.

The food in town was fabulous.
The folks friendly!
2 quilt shops which I bought fabric and wool.
Antique shops, which I found a small goodie.
Other shops and Mark Twain's
boyhood home and museum.

Bob and I are fortunate to have been able to visit
this Midwestern town.

Hope you have the chance to do the same.

Hannibal Tour Blessings To All!
Janice