Good morning sweet friends!
Spring is coming...at least on the calendar.
For those of you who have recently begun to follow me,
My paternal great grandparents not only came from France
but were also first cousins.
Rosemary and Matthew started their romance in France.
Now even though marrying cousins was not unheard of in Europe at the time,
her parents did not want this union for their daughter.
So they whisked her off on an ocean liner to Canada
to make a new life.
Little did they know that she told Matthew
where they were going...
and he headed to Canada on the next boat.
The year was 1873. 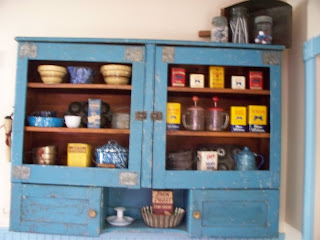 Rosemary and Matthew Husson
married a year later,
moved over to Port Sanilac Michigan and raised
their nine children on a 1000 acre farm.
When their four boys were ready to move on,
they divided there farm into 250 acre parcels,
William, Frank and Charles (my grampa)
each then started their own farms.
The original homestead of 250 acres
was to go to the eldest boy Albert,
however he chose not to become a farmer.
The homestead then went to their unmarried daughter Barbara.
Now the other daughters were given dowries and not land. 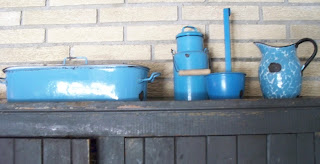 That sounds like a lot of land to afford,
but back then there was no property tax.
My grampa Charlie and Aunt Barbara were the youngest of the clan.
When my Aunt passed, she willed the homestead and land to my grandpa.
When grandpa H passed, my gramma sold the old homestead.
So being part French,
I have a soft spot for French Blue enamelware,
and anything else in the french blue color.

French Blue Blessings To All!
Janice
﻿